< >
Stephen Hawking has been pretty explicit about what he thinks of contacting aliens: if they call, don't answer. Hawking is also one of the founders of the Breakthrough Listen Initiative, which searches the stars for signs of intelligent life—because, apparently, it's still worth knowing if there's anyone out there to talk to. Tonight, that Initiative, whose home is UC Berkley, is joining the investigation into a strange star—KIC 8462852.

As others have reported, the strangeness of KIC 8462852 lies in a couple phenomena: first, the star has been showing some weird light patterns, which can conceivably be explained by a bunch of debris moving in front of it, obscuring our view of its light. But having that much matter that close to a star is very rare—it usually happens only around young stars that are newly formed, and KIC 8462852 is not a young star. Finally, the light output of KIC 8462852 is getting steadily lower in power, which might be weirdest of all. One explanation, proposed by astronomer Jason Wright, is that we've discovered a sun surrounded by a "swarm of megastructures" that were designed to collect energy from the star.

The more familiar name for that kind of thing is a Dyson sphere.

In his landmark paper, Freeman Dyson proposed that:

If extraterrestrial intelligent beings exist and have reached a high level of technical development, one by-product of their energy metabolism is likely to be the large-scale conversion of starlight into far-infrared radiation. It is proposed that a search for sources of infrared radiation should accompany the recently initiated search for interstellar radio communications.

Essentially, the logical end point of an advanced alien civilization would be the creation of giant megastructures that would completely encompass a sun in a sphere that will allow them to harvest all of the energy given off (light, heat, infrared, etc.). What Jason Wright has proposed is that what we're seeing now isn't a complete sphere, but a huge swarm of solar panels that are surrounding the sun and soaking up the energy.

Whatever is causing the strange patterns of light, the hunt for answers kicks into high gear tonight—Breakthrough Listen is going to be commandeering the Green Bank Observatory in West Virginia, one of the largest radio telescopes on Earth, and using it periodically over the next two months to check out the radio signals coming from KIC 8462852. If there's any alien life out near the star, we might pick up the chatter. Here's what the telescope looks like: 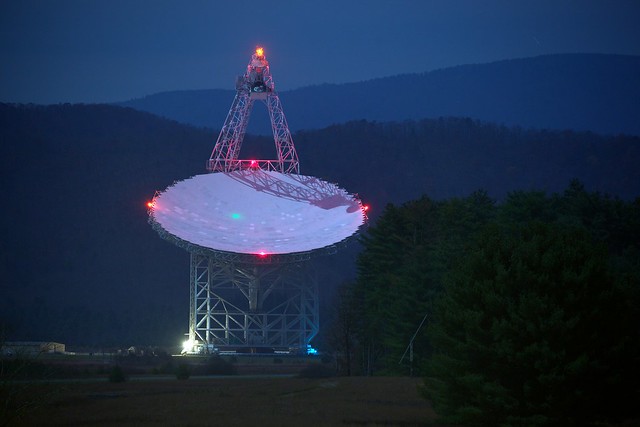 The search for extraterrestrial intelligence has turned up a lot of false positives, but we can always dream. Preferably in Klingon.