Back in June at the 2017 TED Conference, Elon Musk teased a "heavy-duty, long-range semi truck" from Tesla with a dramatic photo of the only the truck's headlights shining through the shadows. The official unveiling did not happen in September as expected, but Musk took to Twitter yesterday to announce that a live webcast event for the Tesla Semi Truck is scheduled for Thursday, and he promised that it will blow people's minds.

The Tesla Semi unveiling was pushed back because of bottlenecking issues with the Tesla Model 3 and because the company wanted to increase battery production for the residents of Puerto Rico after Hurricane Maria. The electric vehicles are expected to have a range of 200-300 miles per charge, and will be safer, less expensive, and better for the environment than the alternative. "With the Tesla Semi, we want to show that an electric truck actually can out-torque any diesel semi," Musk said at the conference. "If you had a tug-of-war," he added, "the Tesla Semi will tug the diesel semi uphill."

We hope that Musk wasn't just speaking theoretically to paint a picture, because now we really want that uphill tug-of-war to happen during the webcast.

According to the EPA, heavy-duty trucks are the second largest segment of the U.S. transportation sector and account for 20 percent of GHG emissions and oil use.

New standards for the industry were introduced in 2016 to improve fuel efficiency and cut carbon pollution, and analysts believe that Tesla's innovations could spark big changes and speed up the process of getting those emissions closer to zero.

As for what the truck will look like beyond Musk's teaser, this past October someone on reddit shared an image of a truck on a transport vehicle somewhere in California. 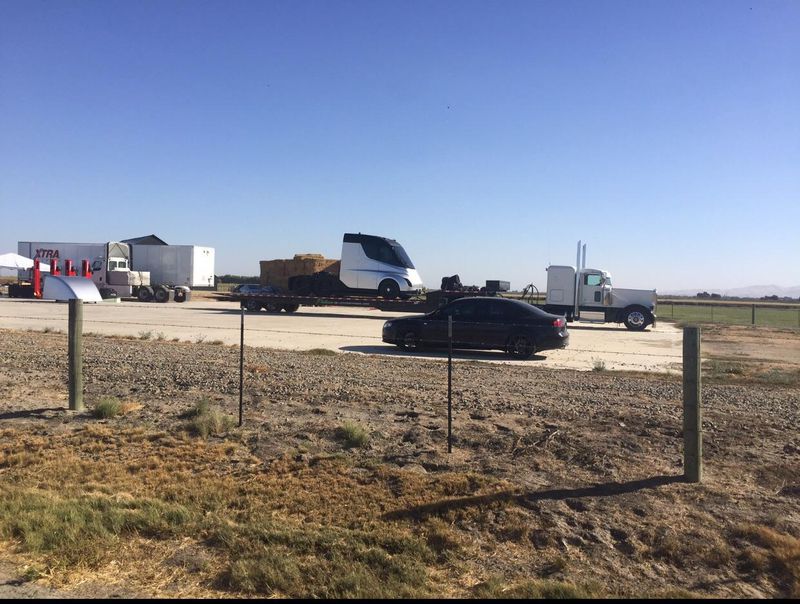 It's unclear why such a top-secret project would be sitting there uncovered for the world to see months before its unveiling, and Tesla would not confirm nor deny that it was what the poster said it was.

For an official first look, we'll all have to tune-in to the webcast at 8pm on Thursday night.