The Falcon Heavy, SpaceX's newest and largest rocket, is ready for its maiden voyage. Well, almost.

There is the minor hassle of making sure it absolutely, definitely won't explode when launched into the air, which admittedly does happen fairly often to experimental SpaceX rockets. But initial construction is complete, and Elon Musk's aerospace company is showing off the (mostly) finished product.

In anticipation of the launch, which currently doesn't have a specific date, the team at SpaceX has been putting the Falcon Heavy through a few last-minute tests, assembling the entire rocket on a vertical launch pad for a "fit check" to make sure that everything will go according to plan when they do try blasting the entire thing off into space.

The fit check took place last week on one of SpaceX's private launch pads in Florida, and the rocket can now be moved to NASA's Kennedy Space Center for yet more tests and checks, in anticipation of its first trip into space. In the meantime, SpaceX has released some photos of this thing looking resplendent on the launch pad, and it certainly does look absolutely incredible.

These photos have been posted to the official SpaceX Flickr account (and also happen to be in the public domain if you'd like to use them), along with some ever so slightly smug messages on Twitter about the five million pounds of thrust that the rocket will generate when activated - this is apparently "equal to approximately eighteen 747 aircraft at full power".

With more than 5 million pounds of thrust at liftoff—equal to approximately eighteen 747 aircraft at full power—Falcon Heavy will be the most powerful operational rocket in the world by a factor of two. https://t.co/NneqPRPr46 pic.twitter.com/oswCUreG6i

The maiden voyage for the Falcon Heavy is a big deal for SpaceX, and for company founder Elon Musk personally. It's taken many years to get to this point, and there have been plenty of delays and set-backs along the way.

Musk has promised that as part of the first mission that the Falcon Heavy undertakes, it will carry his personal Tesla Roadster into space, ready for it to be sent off into orbit around Mars. This, no doubt, is emblematic of Musk's most ambitious long-term goal of establishing a colony on the red planet, so that he can head over there himself and take his car for a spin among the sandy dunes (not that a traditional car would function on Mars anyway).

Regardless of how achievable these long-term company goals might be, it looks like all is in place for SpaceX to pull off their current plan of adding an extra-large rocket to their fleet of spaceships. Seeing the Falcon Heavy on the launch pad, it's hard not to feel some sense of awe and wonder.

There's still the business of getting one important Falcon 9 launch out of the way first, but once that's done, everyone at SpaceX can devote their full attention to launching the company's brand new giant rocket into space for the very first time. 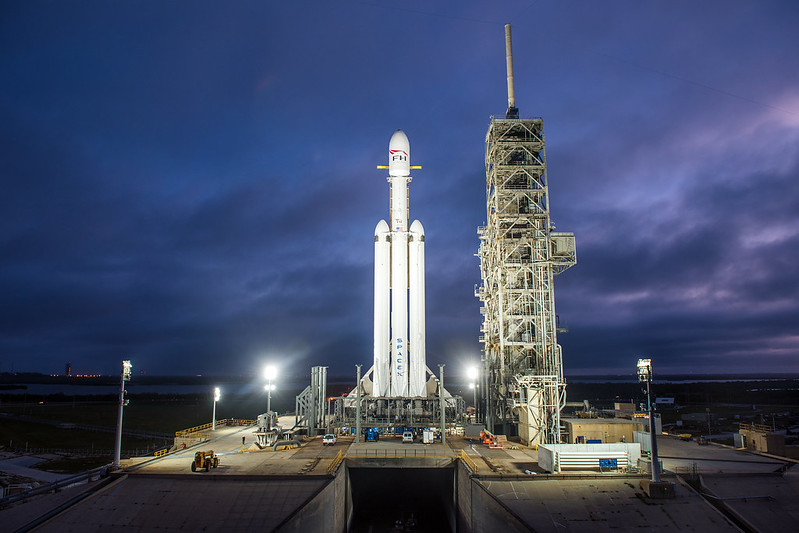