Before you ask: no, this is not the beginning of one of those big bug movies from the 1950s where insects the size of buildings attack cities and are taken out by scientists and military tanks. NASA recently shared an image from its Mars Reconnaissance Orbiter (MRO) that has an interesting texture that arachnophobes may have trouble looking at for too long. 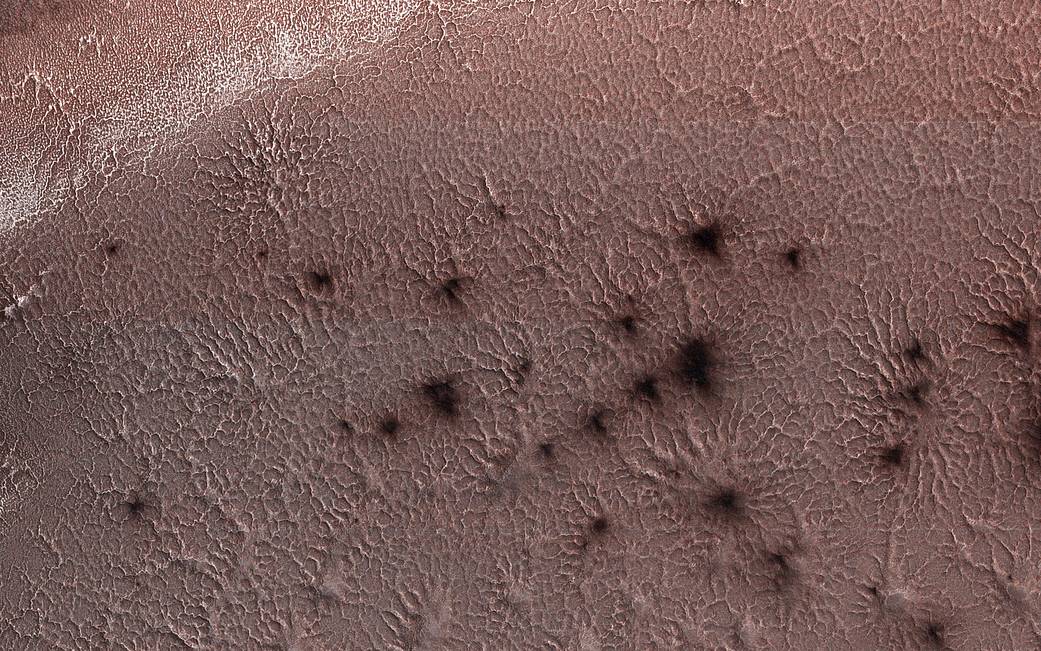 The image was taken by the MRO above the planet's South Pole on May 13, 2018. According to NASA, the region is covered by a carbon dioxide ice cap. When the sun returns in the spring, the landscape changes and spider-like mounds emerge from below the surface, but not to feast on unsuspecting astronauts or to plan their attack on Earth. The mounds are called araneiform terrain and are the result of trapped carbon dioxide breaking through the surface. When the carbon dioxide warms, it changes from a liquid to a gas (sublimation). The gas breaks through the ice cap, leaving the dark spots seen in the MRO image, while the loss of carbon dioxide leaves the ground with veiny lines that resemble spider legs.

The High Resolution Imaging Science Experiment (HiRISE) camera on the MRO has been monitoring different parts of the ice cap for over a decade, thanks in large part to help from the public. "It's heartwarming to see so many citizens of planet Earth donate their time to help study Mars," said HiRISE Deputy Principal Investigator Candice Hansen back in 2016. "Thanks to the discovery power of so many people, we're using HiRISE to take images of places we might not have studied without this assistance."

Spiders seem to be a common motif in space, with the giant icy spider spotted on Pluto by NASA's New Horizons spacecraft back in 2015 and the Red Spider Nebula over in the Sagittarius constellation, just to name a couple. Either it's just a favorite pattern of the cosmos, or we need to find another thing to compare the design to.