NASA Goes Full Nerd, Names Constellations After The Hulk, Godzilla, and the TARDIS

< >
NASA
The naming of constellations is serious business. The ones you're probably most familiar with like the Big Dipper, Sagittarius, and Cassiopeia were all named a long time ago and connect to some kind of ancient mythology or tradition. In more recent times, however, those in charge of naming constellations based on stars or other cosmic presences have been given way more creative freedom. CNN reports that NASA has named 21 new gamma-ray constellations, and among them are patterns named after popular objects and beings from sci-fi history including the Incredible Hulk, the TARDIS from Doctor Who, Thor's hammer, The Little Prince, the Starship Enterprise, and the king of monsters, Godzilla. 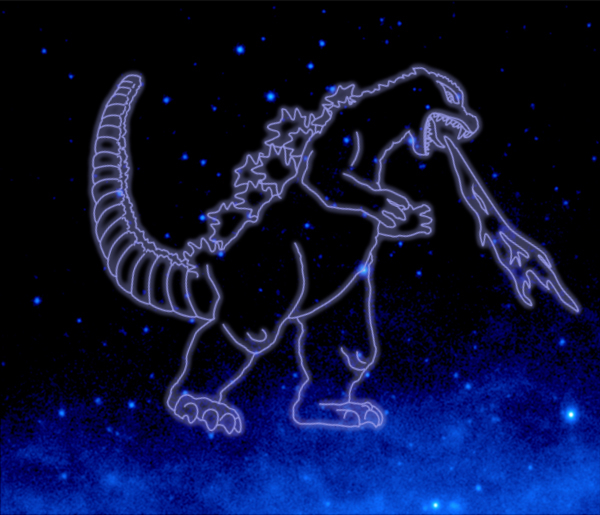 NASA explains that since 2008, the Fermi Gamma-ray Space Telescope has been "surveying the sky in the highest-energy form of light." So far, the telescope has found 3,000 gamma objects. The newly named constellations are a celebration of the past 10 years, even though they are not officially recognized by a larger organization like the IAU. NASA launched an interactive website where viewers can move around the sky and view Godzilla breathing fire, the mythical hammer Mjolnir wreaking havoc on nearby stars, or Hulk looking for something alien to smash. The site also contains descriptions of each object/person and a bit about why it was chosen to represent the gamma-ray patterns.

There are quite a few non-pop culture related constellations that made the list, including Schrödinger's cat, Germany's Neuschwanstein castle, the Fermi satellite, and the Eiffel Tower, but they knew which names would get the most attention from nerds around the planet. Looking at the illustrations superimposed over the gamma-ray objects, most of them are a stretch if you're actually trying to connect the dots, but who cares? Seeing the Hulk in the sky is a lot more interesting than seeing a crab or some guy's belt.
Science
NASA
Space
Astronomy
No
Popular This Week
NASA Is Turning Off the Spitzer Space Telescope Forever After 16 Years in Space – Find Out Why
NASA
Space
The European Space Energy Is Creating Pure Oxygen out of Moon Dust
ESA
Moon
Technology
SpaceX Blows Up Falcon 9 Rocket Worth $57 Million To Prove A Point In Latest Crew Dragon Capsule Test
NASA
SpaceX
A Stalker's Dream: Startup Scraped Billions of Images From Social Media for Facial Recognition AI
Artificial Intelligence
Dystopias